No matter how much we’d like to think so, none of us are completely logical or rational creatures. We are all, to some extent, governed by our emotions and a number of cognitive biases which affect our black and white decision making processes. Yes, even you!

One of the most important is the anchoring effect, researched back in 1974. This bias refers to or tendency to rely too much on the first piece of information presented to us to make decisions. This first piece is information is referred to as the “anchor”.

Think about it: are you more likely to buy a product if a salesmen first tells you its RRP, followed by a special discount – or if he comes right out with the special discount straight away? The first scenario is more effective because the anchor (the higher price) stays in your mind, and makes the special offer price appear cheap. It’s as simple as that.

I’ve used this bias many times has to help marketers improve their landing pages and create content which is more persuasive, and ultimately, more effective. Do you want a piece of the action? Let’s dive in and find out how you can start using the anchoring effect to your advantage, too.

Start with the most expensive option

As I’ve already described, putting the most expensive price or option for your product first and following it up with the cheaper alternatives will “trick” your customer into thinking they’re getting a good deal. This is because, due to anchoring, the first price becomes the benchmark, and everything else looks cheaper when compared to it.

We read a page from left to right, so place the most expensive option – whether that’s the most expensive product, or pricing plan for your service – on the left, so that it’s the first thing users see when they scan your landing page.

You can also use the anchoring bias to influence how a user perceives the information presented to them. An anchor can put the pricing of your particular product into perspective and therefore suddenly make it much more appealing to your customer.

Consider a recent example by design agency Saatchi and Saatchi. They put together a campaign to encourage donations for People in Need. The price of a handbag (€32) is put right next to the price of food for a week for people in need (€4). In this way, the contrast between luxury and necessity becomes obvious – making us feel shocked and guilty. Oh, and much more likely to make a donation. 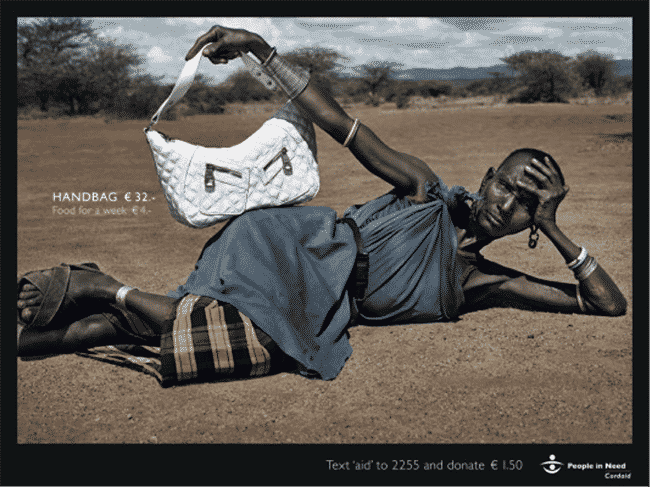 Consider also using imagery to make your point. As humans, we’re very visual beings and images can quickly influence our thinking or state of mind – even quicker than text can. Use images alongside price anchoring for the best results.

But what about negative anchoring?

Anchoring may be an effective tool, but it isn’t failsafe. In fact, sometimes displaying numerous prices on your landing page can create a negative anchoring effect.

Let’s take Buffer’s landing page as an example. Prices for plans are displayed at the monthly rate (with the cheapest coming first). However, when you select one of these plans, you’re hit with the annual fee. This comes completely out of the blue, and may actually put some customers off. To avoid this, the annual fee should also be displayed on the landing page, or at least alluded to.

How to start using the anchoring bias on your landing pages

So, what have we learnt? There are a number of cognitive biases which impact our decision making processes – believe it or not, we are not entirely rational creatures. One of the most effective to maximise for marketing purposes is the anchoring bias – which refers to our over-reliance on and trust of the first piece of information we’re presented with.

To start using the anchoring bias on your landing pages, carefully consider the first piece of information you present to your customer. It may be useful to follow these steps:

This website uses cookies to improve your experience while you navigate through the website. Out of these, the cookies that are categorized as necessary are stored on your browser as they are essential for the working of basic functionalities of the website. We also use third-party cookies that help us analyze and understand how you use this website. These cookies will be stored in your browser only with your consent. You also have the option to opt-out of these cookies. But opting out of some of these cookies may affect your browsing experience.
Necessary Always Enabled
Necessary cookies are absolutely essential for the website to function properly. These cookies ensure basic functionalities and security features of the website, anonymously.
Functional
Functional cookies help to perform certain functionalities like sharing the content of the website on social media platforms, collect feedbacks, and other third-party features.
Performance
Performance cookies are used to understand and analyze the key performance indexes of the website which helps in delivering a better user experience for the visitors.
Analytics
Analytical cookies are used to understand how visitors interact with the website. These cookies help provide information on metrics the number of visitors, bounce rate, traffic source, etc.
Advertisement
Advertisement cookies are used to provide visitors with relevant ads and marketing campaigns. These cookies track visitors across websites and collect information to provide customized ads.
Others
Other uncategorized cookies are those that are being analyzed and have not been classified into a category as yet.
SAVE & ACCEPT
Scroll to Top